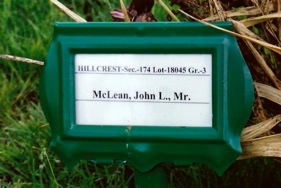 Saxophone great and educator Jackie McLean﻿ died on March 31st 2006. Unfortunately, according to the records kept by a http://www.findagrave.com,  Jackie McLean's grave does not have a headstone. Only a grave marker designates the place of his interment. Jackie McLean is buried at Woodlawn Cemetery in the Bronx, New York City. if these records are correct this is a great travesty. Jackie McLean was one of the most important musicians of the 20th century.  Other generation of saxophonist who followed in the tradition of  Charlie Parker he had the most unique and personal sound. Jackie grew up hearing Charlie Parker, but unlike most of his peers, he did not sound like Charlie Parker. He was left a legacy "in this that document his place in music history. His personal sound, his cry, is immediately identifiable.  It was not just his note selection and exquisite taste, coupled with his personal sound that made Mr. McLean  such a formidable talent. He swung and grooved in a way that demanded your attention. His sound had a bite to it that almost hurt.  It was the sound of the city,  NewYork City, Harlem.  His intelligence and wit were just as compelling.  As he aged his sound matured.  Jackie McLean continued to grow and expand his musical vocabulary. As the years passed he incorporated many of the musical devices associated with the avant garde, pioneered by Ornette Coleman and John Coltrane.

I had the good fortune of hearing Jackie McLean play live a number of times. The last time being a performance about seven or eight years ago at Clark Atlanta University in Atlanta Georgia.

The jazz community and Americans at large should create a fund to pay for a fitting memorial to this musical giant. All too often we do not honor our most talented artists. In addition to being a unique, creative musician Jackie McLean was also an influential educator, teaching at the Hart School of Music, in Hartford Connecticut. Jackie McLean taught two generations of musicians the skills necessary , to carry on the jazz tradition.

His many recordings are a testament to his musical importance.  His students, who continue to perform are, his living legacy.