Troy Andrews, aka Trombone Shorty, and Christian Scott | Young Horns, Bending Tradition | By Larry Blumenfeld - WSJ.com
Trombone Shorty is actually sort of tall. And he's as likely to captivate with his trumpet as with his namesake instrument. But when Troy Andrews (his real name) was just 5 years old, already playing trombone in second-line parades in the Tremé neighborhood of New Orleans, his older brother James, a trumpeter of deep local influence and widespread renown, shouted out the nickname. It stuck. 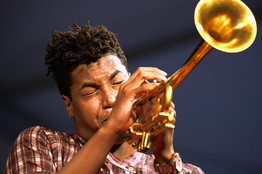 Christian Scott performing at the 2010 New Orleans Jazz & Heritage Festival.
Mr. Andrews absorbed Tremé's storied tradition of instrumental prowess and showmanship from his brother, and from local heroes with their own memorable nicknames, such as "Tuba Fats" and "Frog." Now, at 24, he plays himself in David Simon's HBO series "Treme"—necessary casting, considering his centrality to the musical milieu that drives Mr. Simon's narrative. He's also the latest prodigy to bust beyond that scene. He calls the sound of his Orleans Avenue band "supafunkrock," a statement of hybridized stylistic intent and singular branding. More...
Posted by John H Armwood II at 9:14 PM