Daily Kos: Obama dials up criticisms of the administration

I don't know about you, but when George Bush said he did not believe in nation building, I did not know he was talking about this nation.
Posted by John H Armwood II at 11:23 AM 2 comments: 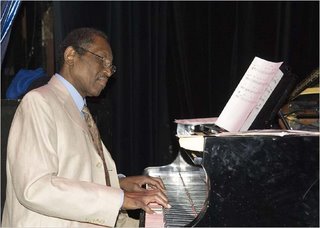 Beginning in 1983, he often performed and recorded with the flutist Elise Wood, whom he married in 2001. In addition to Ms. Wood, he is survived by his brother, Raiford Hicks of Manhattan; his sisters Emma Hicks Kirk and Paula Hicks Neely, both of Stockbridge, Ga.; a daughter and son from a previous marriage, Naima Hicks of Atlanta and Jamil Hicks of Manhattan; two stepchildren, Khadesha Wood of Teaneck, N.J., and Malik Wood of Manhattan; and one granddaughter.
Posted by John H Armwood II at 3:02 PM 1 comment:

Funeral arrangements for recently deceased jazz pianist John Hicks have been finalized.
Viewing of the Body will be held Thursday, May 18, 2006 at Saint Mark's United Methodist Church located at 55 Edgecombe Avenue, New York City. Homegoing service for Mr. Hicks will be held on Friday May 19, 2006 at 2:00 p.m. at Saint Mark's United Methodist Church.

Following the funeral services for Mr. Hicks, the family will have his body shipped to Atlanta, Georgia to be buried at South View Cemetery in the family plot along with his parents, grandparents, and brother, Eldon.

Flowers can be sent to the funeral home.

the V.V. tonight, Ethan heard an excellent set of Fly (Mark Turner, Larry Grenadier, and Jeff Ballard). His companion at the bar was Stanley Crouch, who informed Iverson that John Hicks had passed away.

We salute a modern jazz piano master. The last time Iverson saw Hicks it was with the Charles Tolliver big band, about three or four months ago at the Jazz Standard. Hicks was the star of the show.

We have always been a little disappointed in John Hicks on record.

Crouch said tonight: I heard him live with both Arthur Blythe and Pharoh Sanders when he played---amazing, He knew everything--the whole history of jazz piano. A trio record? Try the one with Elvin Jones and Cecil Mcbee--I think you'll like that one.

Mickey, the elder bartender at the Vanguard, chimed in with: John Hicks was the favorite piano player of both Bradley [the owner of the famous defunct piano bar] and Max Gordon [the first owner of the Vanguard]. He also knew every tune.

Crouch: Yeah, you could ask him for any standard, or even any jazz tune, and he wouid know it.

EI: I just checked out an album of his where he plays Sonny Clark music--not that common a repertoire!

Crouch: Well, you dig?
Posted by John H Armwood II at 5:31 AM No comments: