Miles Davis, Romantic Hero - Assessing the trumpeter's legacy as he enters the Rock and Roll Hall of Fame. By Stanley Crouch 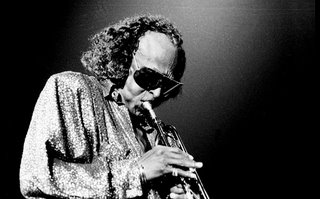 For the innocent listener who hasn't been convinced by the noisy claims and special pleading for the artistic significance of jazz improvisation, Miles Davis' My Funny Valentine is one of the most persuasive arguments. With this recording, Davis was never to be captured playing again with such virtuosic command of varied emotional detail. It is hard to imagine another rhythm section improvising with more adventurous looseness and equal sensitivity to each moment of the music, and it is equally difficult to imagine another young tenor saxophonist, unaware of the tempo and rhythmic freedom that was going to rise about him, responding with more ease, formal beauty, and eloquence than what we hear from George Coleman on selection after selection. It was, as they say in the business, "One of those nights."

What made the recording so special when it came out—and makes it even more special in our decadent and pornographic moment—is the depth of its romantic feeling. There is an intimacy and a great tenderness to the music, both wounded and reverential. In 1964, this engagement in romantic expression was still relatively new because male Negro singers had only been recording romantic songs for about 25 years, having been forced to leave the province to Caucasians due to the sexual limits of racism. But instrumentalists had no such limitations imposed upon them. Jazzmen had used the Tin Pan Alley love song as a common form of American expression, and the most inspired of them bent the melodies until special sounds came out. The champions in the business of instrumental romance were almost always saxophone players, and the "boudoir saxophone" was a stable force in American music. A player was expected to lean his tone against a song and make it sigh with an erotic fire.

The command of the poetic emotion made Miles Davis the greatest player of romantic songs to emerge since World War II and the innovations of Charlie Parker. By the mid-'50s, he had come into his first period of maturity and developed a style in which his lyricism was so revealing that it brought unexpected pleasure to his listeners. Davis' improvisation testified to his willingness to share the facts of very introspective feelings. And none of what he did seemed easy. As My Funny Valentine shows, great difficulty was audible in every musical gesture: The notes had points on them; they were slurred and bent suggestively or painfully; a tone could disappear into a sigh or begin as a pitchless whisper and tellingly work its way up into a note. This delicacy could ascend through sudden moans to yelps or descend to dark growls devoid of vibrato that were nearly embarrassing in their exposure.

Listening to that side of Davis' talent is like a form of eavesdropping. The trumpet sounds are neither crass nor vulgar but are, even so, more than a bit reminiscent of the communicative noises made by lovers at close quarters. We hear clearly why Davis came to prominence in a time when the cold and removed masculinity defined by the night world of criminals and hustlers had a big influence on the Negro sense of male power, especially in the clubs where musicians plied their trade. In that night-world context, Davis' expressive inclinations made him a symbol of tender and complex courage. Consequently, his musical presence was adored by women and envied by men.

Davis became a matinee idol in the mid-1950s when dark-skinned men were beginning to break through the barriers that kept them from being seen in romantic roles or thought of as superb interpreters of love songs. Davis shared this moment with Sidney Poitier and Nat Cole, but his persona included something that neither of theirs did. Following Charlie Parker, in whose band he did some of his earliest work, Davis was moody. He gave the impression that he was not even interested in being known, especially by white folks. The trumpeter was not given to any aspect of the minstrel tradition that has dogged the Negro artist for over a hundred years and has most recently restated itself in the jigaboo antics of rap videos.

It was not that Davis did not smile as much as the fact that Davis, like Parker, did not consider smiling part of his job. The glowering black trumpeter was there, in those little murky clubs from one end of the country to the other, leading a band and making beautiful music in circumstances that were about as opposed to artistic statement as one could imagine. Drinks were sold, people talked, drugs were pushed, prostitutes circulated, and the cash registers rang. At their worst, those circumstances could be as wild as any in the Old West, which is why some of the joints were referred to as "buckets of blood."

Miles Davis, however, tamed those savage surroundings and made it clear that if he didn't feel respected or comfortable he would leave and the paying customers could have it out with the club owners. But if he stayed and felt like playing, his music did not hold back on the lyric quality. That element gave a charismatic frailness to his ballad interpretations. It was a sound that rarely arrived full-blown in American popular art, though it was strongly alluded to by actors such as Leslie Howard, who was often cast as a dreamer just a bit too soft for the world. There was an atmosphere of inevitable doom surrounding such characters, most of whom might be called "gallant fools." Through such types a basic idea was sustained in popular art: Romance was itself a form of heroic engagement and falling in love with an idea, a cause, or a person was an act of bravery.

By bringing that to his music, Miles Davis remade the expectations of the audience. As we hear throughout My Funny Valentine, the trumpeter taught his listeners that a whisper could be as powerful as a shout. A gallant fool, yes, but free of the maudlin Jell-O that usually came with the white American idea of the poetic soul. Davis was just as free, it seemed, of the pool-hall and street-corner braggadocio of the Negro hustling world. Little, dark, touchy, even evil, Miles Davis walked onto his bandstand and made public visions of tenderness that were, finally, absolute rejections of everything silly about the version of masculinity that might hobble men in either the white or the black world. That was his power and that is what makes My Funny Valentine so uniquely touching.