John Coltrane's Finest Hour - Before he jumped into the aesthetic abyss. By Stanley Crouch 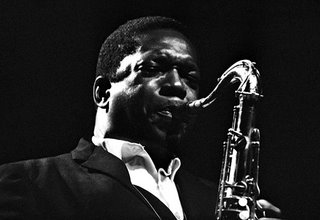 John Coltrane's Finest Hour - Before he jumped into the aesthetic abyss. By Stanley Crouch

John Coltrane
Jazz is still the most original aesthetic form to emerge from the United States, but, after the big-band era of the 1930s, most jazz took place in small rooms that held about a hundred people. The sound systems were usually bad, the waitresses obnoxious, the drunks a pain in the backside, and there was little regard for the players as anything more than lower-rung entertainers. If the music was strong enough, however, the audience would quiet down or shout approval when something especially swinging was played. Unlike in today's more polished venues, the participation of the listeners was not forbidden, and people weren't expected to keep absolutely quiet until a song ended.

That is how it was when John Coltrane came to prominence and recorded some of his finest work in performance during the 1960s. Coltrane died in 1967 and has since achieved a mythic status that obscures the fact that he redefined jazz for the better and for the worse. The better meant an inspired use of minor modes, pentatonic scales, and original melodies that brought a Play Mediabrand new lyricism into the music, which can be heard quite clearly on Crescent, perhaps the greatest studio recording of mature Coltrane. The worse meant undisciplined and formless improvisations of epic length that were more about possession than inspired design—feeling, thought, and technique became lost in the overwhelming aesthetic event. That is why when Coltrane jumped off the cliff into hysteria, he began to lose his audience, which was not prepared, like the rock audience, for formless chaos.

The recent release of One Down, One Up, a 1965 radio performance, features Coltrane's finest group, the classic quartet that included pianist McCoy Tyner, bassist Jimmy Garrison, and drummer Elvin Jones. It was recorded at the Half Note night club in New York and reminds those who were around then of what it was like to hear the band that was recharging the battery of the jazz aesthetic. New York writer Hattie Gossett remembers that, "Coltrane was an interesting contradiction because he was corny like. Very country. Backwoods. He was driving a Jaguar but he was still a country Negro. Suits didn't fit, white socks, pants too short. Then he would get up there and play all of this incredible music that was so complex you could get a headache from it if you weren't ready."

Part of the Coltrane myth is that he had no interest in entertainment and did not submit to its parameters. He is thought to have been too involved with his art to pay attention to what the club owners or the audiences wanted. This is not exactly true. Yes, he did play very long performances that would go beyond the 45-minute sets that most bands played. But one Friday night, when I asked him if he would play "Play MediaImpressions," he told me: "Well, little brother, I would like to, but this is money night and I have to play 'My Favorite Things' every set or the club owner and the customers will not be very happy. But if I get a chance, I'll play it for you." There you have it; he was a Play Mediaworking professional.

Coltrane was a simply dressed and modestly handsome man who could have passed for a deacon on the way to a prayer meeting. He didn't have the look of special authority one saw in Miles Davis, Philly Joe Jones, Dizzy Gillespie, Art Blakey, Milt Jackson, Sonny Rollins, or Betty Carter. At best, he seemed like a humorless workman who had all the details of the job on his mind and had little interest in talking about anything outside of what he was about to do. Once he got to the bandstand, however, something unexpected happened.

On a first encounter with Coltrane, one could never believe the enormity of the force with which he and his musicians played. There was no talking. No announcements. I never saw Coltrane count off a tempo. He looked around, maybe smiled at his drummer, then put his mouth to his horn. What the saxophonist and his musicians did next was beyond material and beyond logic. With his band working under him, behind him, or encircling his sound, Coltrane would rock and roll like a rhythm-and-blues player as he pushed his saxophone forward and drew it back to him, sometimes going down on one knee. To the unprepared, the music might have sounded overstated, undisciplined, and hysterical, but it was not to become that until near the end, when the great quartet was broken up by Coltrane's naive submission to actual noise and incompetence.

Such sincere and overwrought mawkishness led to a recording like Om, which contains so much screaming and hollering that playing it was a good way to quickly clear the house after a party had reached its peak and tiresome people were still hanging around. But in its great moments, the John Coltrane Quartet appeared to have multiplied its instrumentation to three or four times its size, which was why its impact became so explosive: The pressure on the air was that of a big band at full blast. Many of its imitators, quite naturally, thought that playing loud and using modal forms would get the sound of that group onto their bandstands. Sorry. It wasn't about that.

The music could not be easily duplicated because it was the result of Coltrane's vast sonic experience. The saxophonist had evolved at a much more casual pace than his predecessors, not truly coming into his own until he had passed his 30th birthday. He had worked with three landmark thinkers. First, the trumpeter Dizzy Gillespie, who was, with Charlie Parker, the twin fountainhead of the bebop revolution. Next, he worked nightly on the bandstand of Miles Davis, who redefined bebop and brought in simpler melodic materials. Finally, he worked with Thelonious Monk, probably the greatest thinker of them all, whose impact is felt most clearly in the solo that Coltrane improvises on Crescent and in the 16th-note rhythms from Monk's "Trinkle Tinkle," which the Play Mediasaxophonist used to the end of his life.

With all of that experience under his belt, Coltrane went on to reinterpret the basic elements of jazz: the 4/4 swing, the blues, the romantic or contemplative ballad, and Latin or Afro-Hispanic rhythms. One Down, One Up captures the band as Coltrane was staring into an aesthetic abyss but had yet to take the plunge. The playing documents him in the middle of making art before an audience and takes its place alongside his greatest performance recordings, perhaps the best of which is the two-volume Afro Blue/Impressions. The Play Mediatitle track of One Down, One Up will give you the feeling of Coltrane, which is what most artists want to deliver after all the talk is done. As the troubled master himself said, "I never thought about whether or not people understand what I'm doing. The emotional reaction is all that matters. As long as there's some feeling of communication, it isn't necessary that it be understood."

Related in SlateFred Kaplan heralded the official release of One Down, One Up. He also put the album on his list of the best jazz albums of 2005. Stanley Crouch's last piece for Slate meditated on the genius of Fred Astaire.

Stanley Crouch is the author of The Artificial White Man and the forthcoming Considering Genius: Writings on Jazz.
Posted by John H Armwood II at 9:59 AM