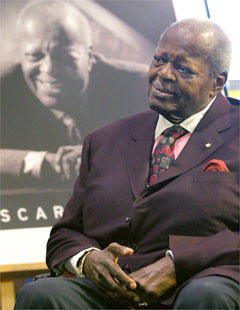 Indeed, the floor was given over to jazz for the afternoon, specifically a special 80th birthday tribute to Canada's legendary jazz pianist Oscar Peterson. Hundreds of fans crowded into the store to see Canada Post formally unveil its new Peterson stamp and Diana Krall and husband Elvis Costello offer their own unique tribute.

There was even a keyboard-shaped birthday cake with candles.

"I have always considered myself a person proud to be a Canadian," a soft-spoken Peterson told the crowd, sitting in a wheelchair on a makeshift stage. "But to have the honour of this stamp issued in my likeness goes beyond my wildest dreams."

For her part, Krall, arriving at the event after delayed flights from New York, was clearly tense singing and playing in front of her lifelong music idol.

"I'm so honoured and nervous," she admitted with a shaky giggle. "It's quite a recital!"

After relating how, as a teenager, she had first seen Peterson performing with Ella Fitzgerald and how it had changed her life, Krall performed a Peterson instrumental with lyrics penned specially by Costello.

"You inspire me to no end every day," she said afterwards. "God bless you and the day that you were born, and I thank you so very much for all that you have given us."

She then led the crowd in a jazzy rendition of Happy Birthday.

After the cake cutting, Peterson surprised everyone by playing a number he wrote entitled Requiem, which he called a tribute to the many jazz artists who have died in recent years.

The 50-cent stamp, an enlarged poster-version of which was unveiled and presented to Peterson to lengthy applause, bears a sepia-coloured photo of the smiling musician with a keyboard motif behind him. He was overheard to say he didn't have much room left on his wall for awards, but would definitely find room for this one.

Four million of the stamps and 500,000 souvenir sheets have been printed and went on sale immediately. Bob Waite, a senior vice-president at Canada Post, said it was a first.

"The Oscar Peterson stamp that we are about to unveil today marks the first time that a Canadian stamp pays tribute to a living Canadian," he revealed. "Now personally, I can think of no Canadian more deserving of this honour."

Looking dapper in a burgundy suit with a pink shirt, the clearly humbled piano legend also thanked Krall, whose talent he said he's always admired, "for gracing this event with her presence."

With posters of the likes of Krall and John Coltrane looking down from the walls, he went on to say he had always been proud of his country and of the jazz medium that had brought him success and recognition.

After a 50-year career in music, Peterson is regarded as one of the world's greatest jazz pianists.

He first learned music from his father, a West Indian immigrant who worked at CN Rail as a porter. Early breaks came when he won a CBC radio amateur contest, followed by appearances on the Happy Gang variety show.

Peterson was discovered performing in a Montreal club in the 1940s, played Carnegie Hall in 1949 and has performed with the likes of Louis Armstrong, Count Basie, Charlie Parker and Duke Ellington. He's recorded more than 300 albums.

He was made a Companion of the Order of Canada in 1984, has two Juno Awards and seven Grammys - including the 1997 Lifetime Achievement Award - as well as several honorary doctorates from educational institutions in both Canada and the United States.
Posted by John H Armwood II at 9:35 PM