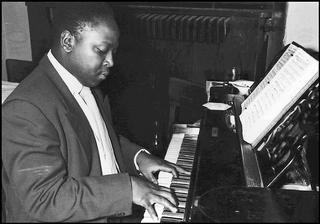 Charlie Hampton, 75, the last leader of the house band at the Howard Theater and a mainstay of the Washington jazz community for decades, died Aug. 17 at Crescent Cities Center, a Riverdale nursing home. He had Alzheimer's disease.

A talented all-around musician who performed professionally on piano, flute, clarinet and four kinds of saxophones, Mr. Hampton -- known to his colleagues as "Hamp" -- was a skilled arranger, composer and conductor who led bands in Washington for more than 40 years.

In 1964, the owner of the Howard Theater, Morton Gerber, chose Mr. Hampton from the saxophone section to replace Rick Henderson as leader of the theater's resident orchestra. One of the reasons Mr. Hampton was selected, Gerber later said, was that he didn't make derogatory comments about other candidates for the job.

For seven seasons, Mr. Hampton led the 16-piece band at the Howard, then in its final years as the leading entertainment showcase of Washington's black community. His days began with morning rehearsals, included at least four performances in the afternoon and evening and often didn't end until the final curtain fell well after midnight.

"The band used to do an opening of jazz tunes," he told The Washington Post in 1984. "It was fantastic, the balcony and everything was filled."

Mr. Hampton and his band, a racially integrated ensemble that included many of the region's finest musicians, had to be ready to perform anything from headlong swing to intricate jazz to the popular R&B and funk music of the day. Capable of working quickly and gifted with an unerring musical ear, he wrote arrangements for many leading performers.

"Sometimes they would come in with no music," recalled Steve Novosel, who played bass in the Howard Theater band when Mr. Hampton took over as director. "He would sometimes have to arrange for the band with an hour's notice."

Mr. Hampton joined the Howard Theater saxophone section in 1957 and seldom left Washington after that. He never recorded an album as a leader, yet he was well known to other prominent musicians. In a 2001 article for Regardie's magazine, he recalled that his band opened a concert at Lorton Correctional Complex that was headlined by Duke Ellington.

"When we played the last song," Mr. Hampton said, "Ellington came over . . . and said, 'I don't know what to play. You already played everything.' "

Charles Hampton was born Feb. 8, 1930, in Greenville, S.C., and by 16 he was playing saxophone in his father's swing band. In the late 1940s, he came to Washington to attend Howard University, where he studied classical music and played clarinet.

"Man, they were tough," he recalled of his Howard teachers. "I wanted to improvise on a tune, and they told me, 'Mr. Hampton, you want to go and improvise on Beethoven? You are at the wrong school.' "

He later graduated from the old Modern School of Music in Washington and played in an Army band from 1953 to 1957. While in the Army, he studied at the Mozart Conservatory in Salzburg, Austria, and learned to do orchestrations.

After the Howard Theater stopped presenting live music in 1970, Mr. Hampton began a long career as a music teacher at the Clifton T. Perkins Hospital Center, a maximum-security psychiatric hospital in Jessup. He staged monthly talent contests for his students, who were escorted to his class by armed guards, and planned the music for Sunday church services at the hospital, often performing himself.

Although he appeared most often as a pianist in local clubs, Mr. Hampton considered the alto saxophone his primary instrument. He modeled his style after that of bebop pioneer Charlie "Bird" Parker, whom he resembled.

"Charlie Hampton was the spitting image of Charlie Parker," said Novosel, who first worked with Mr. Hampton in 1962. "He could have been his twin brother. He played the saxophone like an angel, and some guys even called him 'Bird.' "

Over the years, he appeared at the White House, twice led concerts at the Corcoran Gallery of Art and was a fixture at the Blues Alley, Twins and One Step Down jazz clubs. He continued to perform until December 2001.

Mr. Hampton lived in Northeast Washington before moving to his sister's home in Riverdale in the past couple of years. His marriage to Shirley Harris ended in divorce.

Some of his fellow musicians said they believe Mr. Hampton would have been recognized as one of the top saxophonists of his time had he settled in the jazz capital, New York.

"If Charlie had gone on, he would have been right at the top," singer Dick Smith said. "He was a great musician."
Posted by John H Armwood II at 10:50 AM