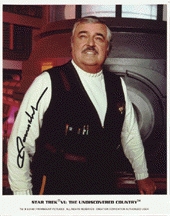 I met James Doohan in the spring of 1993. I was producing a jazz series at the Atlanta Penta/Rennaisance Hotel. The series was held in the 25th floor lounge. When I arrived to set up the event on that evening Mr. Doohan was seated on a coach in the lounge. I introduced myself and chatted briefly with him. He was in Atlanta for a Star Trek Convention. He ended up staying for the show. I later introduced him to the audience as the house rhythm section; Ted Howe piano, Layman Jackson bass and Jimmy Jackson drums, played the Star Trek theme song. Mr. Doohan was both warm and gracious. He seemed to enjoy the show. May he journey to the final frontier in peace.
Posted by John H Armwood II at 6:59 PM