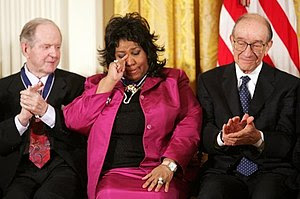 *WJBK FOX 2 News in Detroit is confirming that Franklin is battling pancreatic cancer. A family insider told the station that she’s doing, “OK,” but they ask for the public’s prayers.
The National Enquirer reports that the cancer is incurable and she has less than a year to live.
In November, she canceled all concerts through May 2011 due to “medical reasons,” but never disclosed the illness. Last Thursday (Dec. 2), the Queen of Soul underwent surgery, which was labeled a success. She released the following statement after the mystery procedure:
“The surgery was highly successful. God is still in control. I had superb doctors and nurses whom were blessed by all the prayers of the city and the country. God bless you all for your prayers!
— The Queen of Soul, Ms. Aretha Franklin”
The Enquirer’s report lists pancreatic survival rates at 5-10%, and even lower for someone of Franklin’s age and weight.