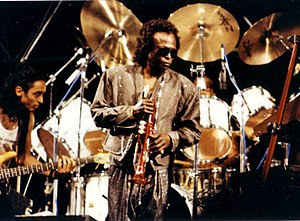 Don Cheadle is gunning for a role he seems all but destined to play in a long-planned biopic of the famed jazz musician Miles Davis. Last week, the actor attended a party atop the swank Thompson Beverly Hills hotel for the release of a 40th-anniversary edition of “Bitches Brew” as a guest of the Davis estate. “I was invited by the family,” Davis told us as he looked out over Los Angeles. “We’ve become friends over the years.”
Cheadle and screenwriter Steven Baigelman recently finished a script that seems designed for awards attention - once it’s actually made. “Davis was his own person and his own artist,” Cheadle, long producers’ top choice for the role of Davis, said with the kind of cool detachment the master musician would have approved of. “There were a lot of other musicians in that era who got stuck, but he never did.”
He went on to draw parallels between the craft of acting and Davis’ art, jazz. “You have to be aware of where you are at all times and be able to respond quickly,” he said of performing. “All his music is in heavy rotation in my house,” he said. “I have love for all music: jazz, Hip-Hop, funk, R&B. But Miles was the granddaddy.” So will we see Cheadle in the role anytime soon? That all depends on a studio stepping up and facing the proverbial music.