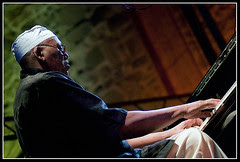 When it comes to the work of Brooklyn-born jazz pianist and composer Randy Weston, the discussion is naturally about Africa, a continent that he has a long association with over a career of more than six decades.
In his travels dating back to the early 1960s, the musician has visited 18 African nations and lived in Morocco, where he founded a jazz club in Tangier.
“Africa is important because all of humanity began there,” Mr. Weston, 84, said in a recent phone interview. “This is the beginning of all of us. I don’t care where you are on the planet earth, we all got African blood — all of us.”
Mr. Weston, a Clinton Hill resident for nearly 50 years, recounts his musical explorations and travels in his recently-published memoir, “African Rhythms,” co-written with Willard Jenkins. Simultaneously, Mr. Weston has released a live album, “The Storyteller,” recorded with his African Rhythms Sextet at New York’s Dizzy’s Club Coca Cola last year.
“I thought it was necessary to document our history because African people, Africa and even African-American traditions are disappearing,” he said. “How can young people know what happened before? I was lucky to live in Africa and hang out with traditional people and just speak about what music can do and the places that it can take you, how it’s a spiritual force.”
Mr. Weston grew up in Bedford-Stuyvesant with a father who instilled a sense of African pride, and he recalled his encounters, as a young person, with Brooklyn’s jazz musicians and other artists.
“You had the black church, the blues, the comedians, the painters, the sculptors, the dancers — it was everything,” he explained. “You can go to the cinema and see a [short film] on Cab Calloway or Duke Ellington… Plus the musicians’ homes were always open, whether it was Max Roach, Ray Abrams, Duke Jordan or Cecil Payne. You just ring the bell and walk in. That’s how spiritual it was.”
Carol Friedman
In the book, Mr. Weston writes about one of his major influences, the legendary jazz pianist Thelonious Monk, whom he first saw play with saxophonist Coleman Hawkins on Manhattan’s 52nd Street. At first, Mr. Weston wasn’t impressed by Monk’s music, he said, but he later became an admirer.
“I heard the magic of Africa in his music,” Mr. Weston said. “I heard the sounds of ancient African civilization in my imagination when I heard his music — all the complex harmonies and melodies. There was a kind of magic that he puts into the piano.”
After returning to Brooklyn from serving in World War II, Mr. Weston saw that heroin was ravaging the community. To escape from that, he found work in the Berkshires, where he further developed as a musician. In 1954 he recorded his first album, “Cole Porter in a Modern Mood.”
Six years later, he recorded the album “Uhuru Afrika,” a four-song suite featuring musicians from Africa and Cuba as well as American jazz players. That same year, 17 African countries achieved their independence. Mr. Weston writes in his book that “Uhuru Afrika” was intended to show that “the African people are a global people.”
Last month, Mr. Weston performed “Uhuru Afrika” at the BMCC Tribeca Performing Arts Center to honor the work’s 50th anniversary.
“We realized that we all had the same foundation our ancestors passed [on], whether it’s the black church or the blues or whatever,” he said. “So I wanted this work of music to describe that, and at the same time to welcome the new nations of Africa.”
In 1961 Mr. Weston embarked on his first visit to Africa as part of a cultural exchange program with other musicians. He still remembers the feeling when the plane first landed in Nigeria, he said.
“My ancestors were taken from Africa in boats and chains,” he said. “Me — I’m on a plane coming back to Africa. When we arrived at 11 o’clock at night, and the plane door opened, we heard these drummers. We’re home. Our ancestral home. It was a very powerful and spiritual experience.”
Mr. Weston then settled in Morocco for a couple of years, where he became immersed with the music and culture of the Gnawa people. As a tribute to them, he wrote the composition “Blue Moses,” inspired by a Gnawa song. However, Mr. Weston writes in the book, he couldn’t perform “Blue Moses” in public because the Gnawa chief considered the song sacred. A year later, the chief changed his mind after some persuasion by the pianist.
“People in the world need to hear this music,” said Mr. Weston. But, he added, “If he had told me not to play that song, I would have not played it and left it alone. I have so much respect for those people.”
In the last five years, Mr. Weston has performed in Japan, Russia, Rwanda and Panama, where his father is from. He hopes to visit Africa again.
“When I travel to other countries,” he said, “I’m always amazed at how music does what it does. We play the music, but when it goes out, we don’t know what happens. We’re like the postmen: we deliver the mail, but we don’t know what’s inside the mail. Each person in that audience is on a separate trip. What a gift from the Creator.”
Randy Weston will take part in Jazz at Lincoln Center’s Listening Party event on Dec. 7 at 7 p.m.; free admission. Mr. Weston will also perform at the Brooklyn Museum on Dec. 12, from 3-5 p.m.; $15. For more information on Randy Weston, visit http://www.randyweston.info.