MPR: Reflections on race from a World War II veteran 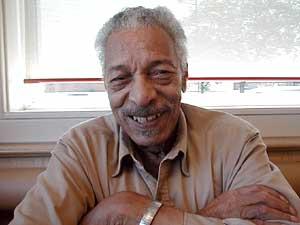 Larger view
Minnesota musician Charles Beasley, a veteran of World War II, reflects on race relations -- 60 years after the end of the war. (MPR Photo/Dan Olson)
The Minnesota Historical Society is observing the 60th anniversary of the end of World War II this weekend. One event on Sunday features music by World War II veteran Charles Beasley and his big band. Beasley was an Army musician during the war, in an all-black unit. Integration of the military at the end of the war helped break down color barriers in this country. The anniversary gives Beasley, 80, an opportunity to reflect on the change in race relations in this country.

St. Paul, Minn. — Minneapolis native Charles Beasley, bandleader and saxophone player, has seen a world of change in race relations from the days in the late l930s when he was a freshman at Minneapolis North High School.

At that time, Beasley and other school band members traveled to Washington, D.C. As in many cities, Jim Crow was still the unofficial law of the land.

"I couldn't stay at the same hotel as the rest of the band," Beasley recalls.

Discrimination was nothing new to Beasley. Local all-black jazz bands could not get work in downtown Minneapolis. On the other hand, there was work for individual black players.
Larger view
Image Beasley's band

That's how Beasley got his first professional job in l939, when he was 16. He was hired for $5. The venue? The Persian Palms.

"It was a great strip joint," says Beasley, "and it was crowded all the time."

By the end of the evening, the $5 had turned into $25 with tips, and Beasley was sold on making a living as jazz man.

He says the older players kept him out of trouble -- allaying his mother's concerns about the hours and the environment.

When World War II broke out, Beasley says, he wanted to be a pilot, but that role was off limits for all but a few African-Americans.

Instead, Beasley was assigned to an all-black military band, playing mostly for black soldiers. Even with segregation in the military and his low rank, Beasley says life for the group he played in was like nothing he had ever experienced.

"I was treated like an officer, so I couldn't help but like it. I had my own valet. I'd get up in the morning, we had reveille at 10 o'clock," Beasley recalls.
(The improvement in race relations is) just wonderful. And if this could have happened years and years ago, we would be so much further along than we are now.

The band even had its own plane to take them to various performances.

Near the end of the war, the military -- including the band Beasley played in -- was integrated. The move foreshadowed changes that would take hold throughout society decades later.

However, at the time, Beasley says, he had little hope the end of the war would end segregation in civilian life.

He was a college graduate with a music major. He found work at first in all-black schools in the South. He moved back to Minnesota and found work as janitor. He started his shift at 7 in the morning.

That was his life for years, balancing a day job with work at night as a jazz musician.

Beasley retired from his day job in l990. He was playing with 10 bands at the time, but cut back to three. That year he started his own group, the Charles Beasley Big Band.

Beasley marks this country's improved race relations in several ways. Two years ago, he visited the formerly all-black school in Tennessee where he'd taught after the war.

In those days, he knew of young black men who'd been put in jail on charges of what he calls reckless eyeballing. When he arrived for his visit, he was surprised to have a young white woman ask him if he needed directions.

"Back in the days when I was down here I wouldn't have even dared to say hello to her, or even look in that direction," says Beasley.

Beasley says the improvement in race relations in this country, while far from perfect, is dramatic.

"It's just wonderful. And if this could have happened years and years ago, we would be so much further along than we are now."

Beasley and his big band plays at the Minnesota Historical Society Sunday, as part of the society's tribute to the state's World War II veterans.
Posted by John H Armwood II at 1:13 AM