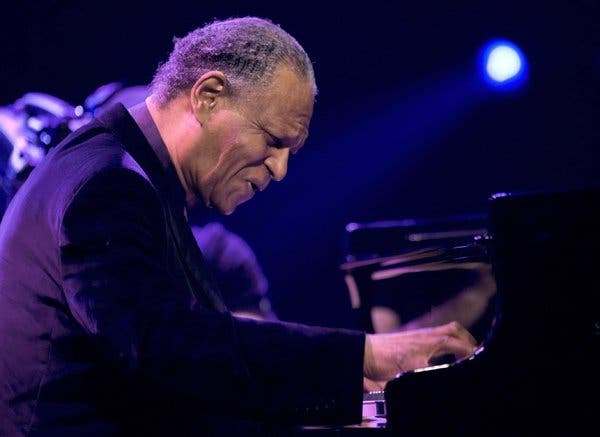 McCoy Tyner, a cornerstone of John Coltrane’s groundbreaking 1960s quartet and one of the most influential pianists in jazz history, died on Friday at his home in northern New Jersey. He was 81.

His nephew Colby Tyner confirmed the death. No other details were provided.

Along with Bill Evans, Herbie Hancock, Chick Corea and only a few others, Mr. Tyner was one of the main expressways of modern jazz piano. Nearly every jazz pianist since Mr. Tyner’s years with Coltrane has had to learn his lessons, whether they ultimately discarded them or not.

Mr. Tyner’s manner was modest, but his sound was rich, percussive and serious, his lyrical improvisations centered by powerful left-hand chords marking the first beat of the bar and the tonal center of the music.

That sound helped create the atmosphere of Coltrane’s music and, to some extent, all jazz in the 1960s. (When you are thinking of Coltrane playing “My Favorite Things” or “A Love Supreme,” you may be thinking of the sound of Mr. Tyner almost as much as that of Coltrane’s saxophone.)

To a great extent he was a grounding force for Coltrane. In a 1961 interview, about a year and a half after hiring Mr. Tyner, Coltrane said: “My current pianist, McCoy Tyner, holds down the harmonies, and that allows me to forget them. He’s sort of the one who gives me wings and lets me take off from the ground from time to time.”

Mr. Tyner did not find immediate success after leaving Coltrane in 1965. But within a decade his fame had caught up with his influence, and he remained one of the leading bandleaders in jazz as well as one of the most revered pianists for the rest of his life.

Alfred McCoy Tyner was born in Philadelphia on Dec. 11, 1938, to Jarvis and Beatrice (Stephenson) Tyner, both natives of North Carolina. His father sang in a church quartet and worked for a company that made medicated cream; his mother was a beautician. Mr. Tyner started taking piano lessons at 13, and a year later his mother bought him his first piano, setting it up in her beauty shop.

He grew up during a spectacular period for jazz in Philadelphia. Among the local musicians who would go on to national prominence were the organist Jimmy Smith, the trumpeter Lee Morgan and the pianists Red Garland, Kenny Barron, Ray Bryant and Richie Powell, who lived in an apartment around the corner from the Tyner family house, and whose brother was the pianist Bud Powell, Mr. Tyner’s idol. (Mr. Tyner recalled that once, as a teenager, while practicing in the beauty shop, he looked out the window and saw Powell listening; he eventually invited the master inside to play.)

While still in high school Mr. Tyner began taking music theory lessons at the Granoff School of Music. At 16 he was playing professionally, with a rhythm-and-blues band, at house parties around Philadelphia and Atlantic City.

Mr. Tyner was in a band led by the trumpeter Cal Massey in 1957 when he met Coltrane at a Philadelphia club called the Red Rooster. At the time, Coltrane, who grew up in Philadelphia but had left in 1955 to join Miles Davis’s quintet, was back in town, between tenures with the Davis band.

The two musicians struck up a friendship. Coltrane was living at his mother’s house, and Mr. Tyner would visit him there to sit on the porch and talk. He would later say that Coltrane was something of an older brother to him.

Like Coltrane, Mr. Tyner was a religious seeker: Raised Christian, he became a Muslim at 18. “My faith,” he said to the journalist Nat Hentoff, “teaches peacefulness, love of God and the unity of mankind.” He added, “This message of unity has been the most important thing in my life, and naturally, it’s affected my music.”

In 1958, Coltrane recorded one of Mr. Tyner’s compositions, “The Believer.” There was an understanding between them that when Coltrane was ready to lead his own group, he would hire Mr. Tyner as his pianist.

For a while Mr. Tyner worked with the Jazztet, a hard-bop sextet led by the saxophonist Benny Golson and the trumpeter Art Farmer. He made his recording debut with the group on the album “Meet the Jazztet” in 1960.

Coltrane did eventually form his own quartet, which opened a long engagement at the Jazz Gallery in Manhattan in May 1960, but with Steve Kuhn as the pianist. A month later, halfway through the engagement, Coltrane made good on his promise, replacing Mr. Kuhn with Mr. Tyner.

That October, Mr. Tyner made its first recordings with Coltrane, participating in sessions for Atlantic Records that produced much of the material for the albums “My Favorite Things,” “Coltrane Jazz,” “Coltrane’s Sound” and “Coltrane Plays the Blues.”

Mr. Tyner was 21 when he joined the Coltrane quartet. He would remain — along with the drummer Elvin Jones and, beginning in 1962, the bassist Jimmy Garrison — for the next five years. Through his work with the group, which came to be known as the “classic” Coltrane quartet, he became one of the most widely imitated pianists in jazz.

The percussiveness of his playing may have had to do with the fact that Mr. Tyner took conga lessons as a teenager from the percussionist Garvin Masseaux, and learned informally from the Ghanaian visual artist, singer and instrumentalist Saka Acquaye, who was studying at the time at the Pennsylvania Academy of Fine Arts.

Harmonically, his sound was strongly defined by his use of modes — the old scales that governed a fair amount of the music Mr. Tyner played during his time with Coltrane — and by his chord voicings. He often used intervals of fourths, creating open-sounding chords that created more space for improvisers.

“What you don’t play is sometimes as important as what you do play,” he told his fellow pianist Marian McPartland in an NPR interview. “I would leave space, which wouldn’t identify the chord so definitely to the point that it inhibited your other voicings.”

The Coltrane quartet worked constantly through 1965, reaching one high-water mark for jazz after another on albums like “A Love Supreme,” “Crescent,” “Coltrane Live at Birdland,” “Ballads” and “Impressions,” all recorded for the Impulse label.

Between tours, Mr. Tyner stayed busy in the recording studios. He made his own records, for Impulse, including the acclaimed “Reaching Fourth.” He also recorded as a sideman, particularly after 1963; among the albums he recorded with other leaders’ bands were minor classics of the era like Joe Henderson’s “Page One,” Wayne Shorter’s “Juju,” Grant Green’s “Matador” and Bobby Hutcherson’s “Stick-Up!,” all for Blue Note.

When Coltrane began to expand his musical vision to include extra horns and percussionists, Mr. Tyner quit the group, at the end of 1965, complaining that the music had grown so loud and unwieldy that he could not hear the piano anymore. He was a member of the drummer Art Blakey’s touring band in 1966 and 1967; otherwise he was a freelancer, living with his wife and three children in Queens.

Mr. Tyner’s survivors include his wife, Aisha Tyner; his son, Nurudeen, who is known as Deen; his brother, Jarvis; his sister, Gwendolyn-Yvette Tyner; and three grandchildren.

Just before Coltrane’s death in 1967, Mr. Tyner signed to Blue Note. He quickly delivered “The Real McCoy,” one of his strongest albums, which included his compositions “Passion Dance,” “Search for Peace” and “Blues on the Corner,” all of which he later revisited on record and kept in his live repertoire.

He stayed with Blue Note for five years, starting with a fairly familiar quartet sound and progressing to larger ensembles, but these were temporary bands assembled for recording sessions, not working groups. It was a lean time for jazz, and for Mr. Tyner. He was not performing much and, he later said, had considered applying for a license to drive a cab.

He moved to the Milestone label in 1972, an association that continued until 1981 and that brought him a higher profile and much more success. In those years he worked steadily with his own band, including at various times the saxophonists Azar Lawrence and Sonny Fortune and the drummers Alphonse Mouzon and Eric Gravatt.

His Milestone albums with his working group included “Enlightenment” (1973), recorded at the Montreux Jazz Festival, which introduced one of his signature compositions, the majestic “Walk Spirit, Talk Spirit.” He also recorded for the label with strings, voices, a big band and guest sidemen including the drummers Elvin Jones, Tony Williams and Jack DeJohnette.

Mr. Tyner did not use electric piano or synthesizers, or play with rock and disco backbeats, as many of the best jazz musicians did at the time; owning one of the strongest and most recognizable keyboard sounds in jazz, he was committed to acoustic instrumentation. His experiments outside the piano ran toward the koto, as heard on the 1972 album “Sahara,” and harpsichord and celeste, on “Trident” (1975).

In 1984, he formed two new working bands: a trio, with the bassist Avery Sharpe and the drummer Aaron Scott, and the McCoy Tyner Big Band. His recordings with the big band included “The Turning Point” (1991) and “Journey” (1993), which earned him two of his five Grammy Awards. He also toured and made one album with the nine-piece McCoy Tyner Latin All-Stars.

He was signed in 1995 to the reactivated Impulse label, and in 1999 to Telarc. From the mid-’90s on he tended to concentrate on small-band and solo recordings.

In 2002, Mr. Tyner was named a National Endowment for the Arts Jazz Master, one of the highest honors for a jazz musician in the United States.

He resisted analyzing or theorizing about his own work. He tended to talk more in terms of learning and life experience.

“To me,” he told Mr. Hentoff, “living and music are all the same thing. And I keep finding out more about music as I learn more about myself, my environment, about all kinds of different things in life.

“I play what I live. Therefore, just as I can’t predict what kinds of experiences I’m going to have, I can’t predict the directions in which my music will go. I just want to write and play my instrument as I feel.”