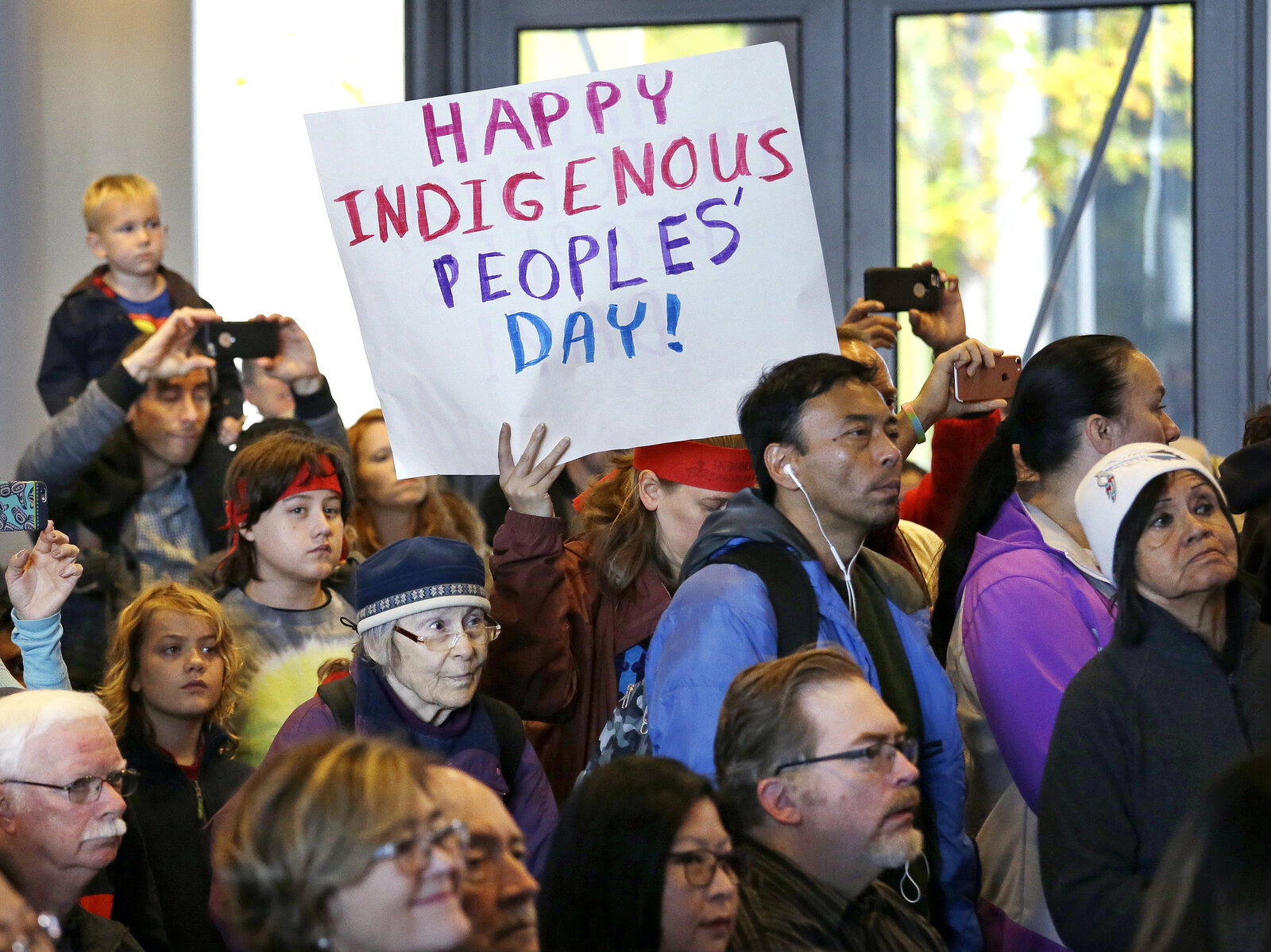 "On Monday in the nation's capital, there is no Columbus Day. The D.C. Council voted to replace it with Indigenous Peoples' Day in a temporary move that it hopes to make permanent. Several other places across the United States have also made the switch in a growing movement to end the celebration of the Italian explorer in favor of honoring Indigenous communities and their resiliency in the face of violence by European explorers like Christopher Columbus.

Baley Champagne is responsible for that change in her home state of Louisiana. The tribal citizen of the United Houma Nation petitioned the governor, John Bel Edwards, to change the day. He did, along with several other states this year.

"It's become a trend," Champagne said. "It's about celebrating people instead of thinking about somebody who actually caused genocide on a population or tried to cause the genocide of an entire population. By bringing Indigenous Peoples' Day, we're bringing awareness that we're not going to allow someone like that to be glorified into a hero, because of the hurt that he caused to Indigenous people of America."

And so in Houma, La., people from across the state will gather to honor and celebrate Indigenous Peoples' Day for the first time.

She wants it to be "a celebration and to bring acknowledgment to the Native population," Champagne said. "You know, because we have many friends of all different races in this area and Houma is named after the Houma people, the Houma Choctaw. So to bring this, I think it's long overdue. It's a big celebration. And we're just so excited to have this finally."

There's no comprehensive list of places that have switched, but at least 10 states now celebrate some version of Indigenous Peoples' Day on the second Monday in October, like Hawaii's Discoverers' Day or South Dakota's Native Americans' Day. Many college campuses have dumped Columbus Day for Indigenous Peoples' Day as have more than 100 cities, towns and counties across the country.

For Native Americans, Columbus Day has long been hurtful. It conjures the violent history of 500 years of colonial oppression at the hands of European explorers and those who settled here — a history whose ramifications and wounds still run deep today.

"Today we understand that while [Columbus] was an explorer and is credited with being one of the first Europeans to arrive in the Americas, we now know a great deal about the history and the way that he and his people behaved when they came to this continent," said Shannon Speed, a citizen of the Chickasaw Nation and director of the UCLA American Indian Studies Center. "Which included pillaging, raping and generally setting in motion a genocide of the people who were already here. That's not something we want to celebrate. That's not something anyone wants to celebrate."

For many Italian Americans, Columbus Day isn't just about the man but about what the day represents: a people searching for safety and acceptance in their new home.

For many Italian Americans, Columbus Day is about celebrating Italian heritage and the contributions of Italian Americans to the United States. Above, the Christopher Columbus statue at Manhattan's Columbus Circle in New York.

In 2017, after someone vandalized the Christopher Columbus statue in New York City's Central Park, the then-president and chief operating officer of the National Italian American Foundation, John M. Viola, wrote in a New York Times editorial, "The 'tearing down of history' does not change that history. In the wake of the cultural conflict that has ripped us apart over these months, I wonder if we as a country can't find better ways to utilize our history to eradicate racism instead of inciting it. Can't the monuments and holidays born of our past be reimagined to represent new values for our future?"

He went on to write, "We believe Christopher Columbus represents the values of discovery and risk that are at the heart of the American dream, and that it is our job as the community most closely associated with his legacy to be at the forefront of a sensitive and engaging path forward, toward a solution that considers all sides."

Speed says she recognizes the importance of celebrating the history and contributions of Italian Americans, but there has to be another way to honor them.

"There are a lot of Italian Americans who very much support the shift to Indigenous Peoples' Day because they don't want to feel themselves associated with a man who is known to have committed terrible crimes against humanity," she said. "Italian Americans were greatly discriminated against in this country, and it's incredibly important to have a day to celebrate that heritage. It just shouldn't be around the figure of Columbus."

Celebrating Columbus, she said, not only whitewashes a violent history but also discounts the further trauma that honoring him inflicts on Indigenous people.

For Native Americans, that pain is the first thing they feel when they hear "Columbus Day," Speed said. But when a group of Berkeley, Calif., residents asked the city to change Columbus Day to Indigenous Peoples' Day in 1992, then-Mayor Loni Hancock said it was the first time she'd really understood the negative impact of this holiday on Indigenous people.

"We had to think about what is this holiday about and who discovered America and how really profoundly disrespectful it was to say that a European explorer who never actually set foot on the continent did that," Hancock said. "Discounting the Indigenous people who had lived here for centuries with very sophisticated cultures and pretty much in harmony with the earth."

Indigenous peoples first proposed the day during a 1977 United Nations conference on discrimination against them. But it wasn't until 1989 that South Dakota became the first state to switch Columbus Day to Native Americans' Day, celebrating it for the first time in 1990. And then Berkeley became the first U.S. city to switch to Indigenous Peoples' Day. The Pew Research Center says Columbus Day is the most inconsistently observed national holiday in the United States.

"Certainly the hundreds and thousands of Italian immigrants who came over in steerage class on the boats at the turn of the 19th century endured a lot of hardships to get here," Hancock said. "But the discovery of America is something where you want to get your history right. And I think that to fully understand and take responsibility for who we are as a people in this land made it very important to be clear about who was here first and reflect on what happened in our history after that, in terms of the displacement and oftentimes genocide of those people. How that might have reflected a general discounting of the history and the humanity of nonwhite people of many kinds in this country and to take responsibility for our history."