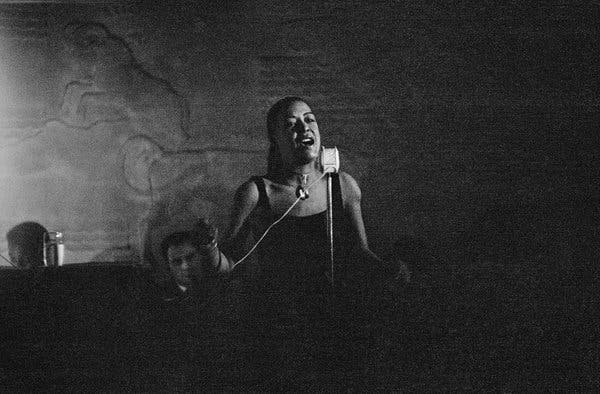 Taking our orders at Minton’s Playhouse, the Harlem jazz club, our French waiter, improbably named Karl Smith, says that when he got to New York, he was determined “to do something very American.” For a Frenchman, nothing could be more American than jazz music and Harlem, and Karl smiles as he looks over at the bandstand where the musicians are tuning up. Then he darts away to get our drinks.

Minton’s! I might have come uptown by subway, but it feels like a kind of time travel. It’s an almost impossibly legendary name. Opened by the saxophone player Henry Minton in 1938, as part of the Cecil Hotel — now its sister restaurant — on 118th Street, this is where bebop (call it modern jazz) was born and the musical world swung off its axis.

In the early 1940s, a few young guys — Thelonious Monk, Charlie Christian, Dizzy Gillespie and Charlie Parker among them — invented the new music. Dissonant, complex, impossible to play, bebop was seductive and gorgeous in a cerebral way, and it defined cool. America had entered World War II; musicians were drafted, the big bands decimated; with the country in a somber mood, swing music and the Harlem ballrooms, famous for their wild Lindy-hoppers, were out of fashion. Bebop, this new, modern jazz, was for small clubs like Minton’s where nobody danced, and customers paid serious attention to the music, as they might to Bach. Bebop was about jam sessions and improvisation, and you never knew who would show up at Minton’s; the musicians — Charles Mingus, Coleman Hawkins, Louis Armstrong, Ella Fitzgerald, Lester Young — were the celebrities.

As I arrived this Sunday evening, I felt I might actually see Monk, who was the house pianist, on the front steps, wearing a too-big pinstriped suit and a jaunty beret.

Outside near the entrance, the iconic pink neon sign. Inside, the long narrow room with the bar at the front, where the bartender is shaking cocktails for a few early customers. The club’s walls are painted burnt orange, the rows of plush velvet chairs and banquettes are a yellowish gold, the tables are draped with white linen and subtle lighting gilds the whole place. There are no windows, but you don’t need a view to listen to great music.

Some couples, a few families, have trickled in. Our waiter delivers our drinks, including a “Monk’s Dream” for me. I’m wondering if I want a “Kind of Blue” appetizer, though I’m not sure I see Miles Davis — who played at Minton’s when he was very young — as a mussels-in-white-wine kind of guy; he was always more Beluga caviar.

On the wall behind the banquettes are William Gottlieb’s photographs of Dizzy and Charlie, Monk and Billie Holiday with the gardenia behind her ear. The rich black-and-white images feel both fleeting and permanent, melancholy and in the moment, the way the music is. They look as Whitney Balliett, the famous jazz writer, famously said of jazz, like “the sound of surprise.”

Tonight is a regular Sunday set called “Sax Meets Singer,” led by the sax player Christopher McBride, who is chatting to his musicians on the bandstand.

“Everyone I love in jazz is dead,” says my companion, looking from the picture of Dizzy to the young McBride and bearing down on a fat burger. He changes his tune when McBride rips into a Sonny Rollins original, spilling choruses from his alto. “My God,” he says, putting the burger down, “This guy’s the real thing.”

McBride, in his Hawaiian shirt, radiates joy. He draws on older traditions as well as bebop: call and response, gospel, New Orleans, Chicago. He makes me think of Cannonball Adderley (“He’s my guy,” McBride tells me later). At 34, McBride is part of a network of fabulous young musicians in New York, including his own band, the stunningly good Jonathan Edward Thomas, the drummer Curtis Nowasad and tonight’s vocalist, Cedric Easton.

Above the bandstand is the famous Minton’s mural, painted in 1946 by the artist Charles Graham. Four musicians sit in a hotel room — possibly the Cecil Hotel. In the picture there’s a bottle of port on the dresser, a girl in a red dress asleep on the bed, face down. People say it’s Billie Holiday, sleeping off a hangover.

By the second set, there’s a crowd, a mix of white and black, local and tourist. McBride tells the customers, “This is Harlem. If you like what we do, just holler, ‘All Day Long.’” So we call it out. In a 1959 Esquire piece, Ralph Ellison describes how in that same decade, young Europeans came to Minton’s as to a shrine in much the same way young Americans went to the Deux Magots in Paris. We’re all tourists now.

Minton’s lasted until 1974, but modern jazz had already moved to 52nd Street and then to the Village. Shut down for 30 years, Minton’s collected dust until it was rescued by Richard Parsons; the former C.E.O. of Time Warner, he was recently appointed interim chairman of the board of CBS. Parsons, who has always loved jazz, told me that as a teenager in Brooklyn, taking a date to a Manhattan jazz club made him feel grown up, and he thought, One day I’ll own a great supper club. In 2013, he reopened Minton’s. (The current co-owner is Raphael Benavides, a gregarious Harlemite originally from Argentina.)

When I was still a teenager, I spent plenty of time at jazz clubs in the Village. It was the coolest thing I could imagine: dressing up, going down to the Village Vanguard where, smoking cigarettes with what I thought was a certain élan, my friends and I would watch Miles Davis with knowing, head-nodding esteem. (One friend got a kiss on the cheek from Charles Mingus.)

I think I’ve always loved the jazz clubs and the musicians as much as the music. They’re wrapped for me in a web of nostalgia — for my youth and a disappearing New York — and melancholy, because the music, even the sharpest bebop, always seems inflected with the blues.

As a finale, McBride and his guys play a thrilling version of The Beatles’s “Come Together.” The crowd is on its feet, and I’m knocked off the nostalgia highway into the joyous present at Minton’s, where the music and the musicians are alive and well."

The Harlem Jazz Club Where the Spirit of Billie Holiday Lives On - The New York Times
Posted by John H Armwood II at 6:17 AM