Although he was internationally known as a jazz bassist and composer, friends remember Ben Tucker as a charitable man who did wonders for the Savannah community.
The 82-year-old, who was killed late Tuesday morning when the golf cart he was driving on Hutchinson Island was struck by a speeding car, was instrumental in reviving the once-considerable jazz community in Savannah, said Teddy Adams, a local jazz trombonist and longtime friend of Tucker.
Robert William Martin, 52, of Spicewood, Texas, had been charged with racing, vehicular homicide in the first degree, and reckless driving after the dark blue Chrysler 300 he was driving at a high rate of speed southbound on Grand Prize of America Roadway struck Tucker’s golf cart about 11:45 a.m., said Julian Miller, Savannah-Chatham police spokesman.
The police department’s Major Accident Investigation Team determined Tucker was crossing the street, a part of a former road race track on the island, from the golf course to the employee parking lot when Martin’s vehicle hit the golf cart, Miller said. He added police are continuing their investigation into the wreck. 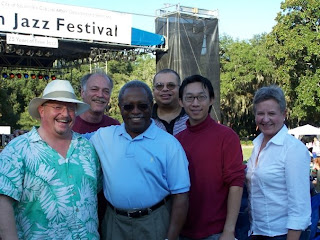 Back- Rick Saylor and John Armwood
Posted by John H Armwood II at 6:14 AM