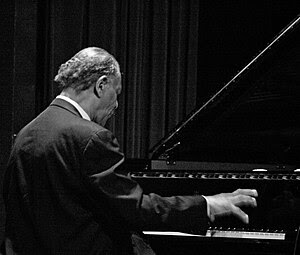 By BEN RATLIFF
The permanent amphitheater in Marcus Garvey Park in Harlem is a void right now. It’s being rebuilt, band shell and seating. So the Harlem part of the two-day Charlie Parker Jazz Festival, on Saturday afternoon, was moved to a rented stage on a lawn at the northeast corner of the park, next to the farmer’s market, which was still open when the first band started. Later on, a boisterous African drum circle took shape not 100 feet from the stage while McCoy Tyner, though unhappy with the piano’s tuning, boistered back through a solo set.
The free festival has corporate sponsorship but soul prestige; for a Parks Department gig, it books competitively. In the Harlem lineup was Revive Da Live, the changeable collective of young musicians combining jazz and hip-hop; the tenor saxophonist J. D. Allen’s trio; the pianist Jason Moran with his trio, Bandwagon; and Mr. Tyner, one of jazz’s bishops since his time with John Coltrane’s quartet in the early 1960s. (Part 2 of the festival took place Sunday at Tompkins Square Park in the East Village.)
It was a really, really good scene, despite the direct sun pouring down on the audience and the stage. This is where some of the best dreams and desires for jazz in America, neither commercial nor bohemian, come out in a burst: jazz is a cause to defend, a collective memory, a spiritual thing, a Harlem thing. Politicians knew enough to be there: Representative Charles B. Rangel, State Senator Bill Perkins. So did lots of musicians, checking out their friends. Older men and women with hats and picnic baskets, returnees every year, all looking as if they owned their patch of park, asking who brought the corkscrew and what’s the name of that song. A festival operative standing in front of the stage, hollering praise during the music like a running commentary.
Mr. Tyner, now 71, wasn’t doing that much with the idea of a solo-piano concert; if there had been a band behind him, it might have sounded much the same. Still making his left-hand chords boom like kettle drums, he played some of his own songs, Coltrane’s “Mr. P.C.,” and a rubato “I Should Care,” weighed down with ornament. He kept his foot on the sustain pedal for almost the entire 40 minutes; nearly the only exceptions came when he stole away from the song to splash the keyboard abstractly. It was a strange set, monolithic but distracted. He ended by apologizing for the weather’s impact on the piano, as yet another politician escorted him offstage: his younger brother, Jarvis Tyner, executive vice chairman of the Communist Party USA.
Revive Da Live, an octet with a rapper and D.J., Raydar Ellis, brought arrangements of Parker tunes and solos. The modern frames were cool sometimes, but it was individual performances, especially from Marc Cary on electric piano and Marcus Strickland on tenor saxophone, that put it over. And Jason Moran’s Bandwagon played a loose and typically meta-historical set that went heavy on sound samples and recontextualized quotations. The band played hard over recordings of Eddie Jefferson’s vocalese version of “Body and Soul” and Billie Holiday’s “Big Stuff.”
But J. D. Allen made the most of the day. His trio doesn’t try to be comprehensive or world-spanning or express the new jazz pedagogy; it performs strong, short melodies and rhythms that develop a little and then end. Its music is bracing and easy to follow, looking toward the language of free jazz but staying close to the themes’ guideposts, and never letting the rhythm get baggy.
Something really good has happened to this trio over the last five years. First it secured its sound on the bandstand. (One of the quirks of that sound is that the bassist, Gregg August, roams furthest from the groove, while the leader and the drummer stay in lockstep; here he was boosted good and loud in the mix.) Then it set to work on its performance ritual, its relationship with audiences.
On Saturday the band got its pacing exactly right and didn’t let the crowd rest. It kept coming with new melodies; sometimes it joined pieces together, and sometimes it came to a complete stop, but only for about a second and a half. It changed tempo and mood, not much but just enough. And it got the most concentrated response from the audience, even from the older folks.