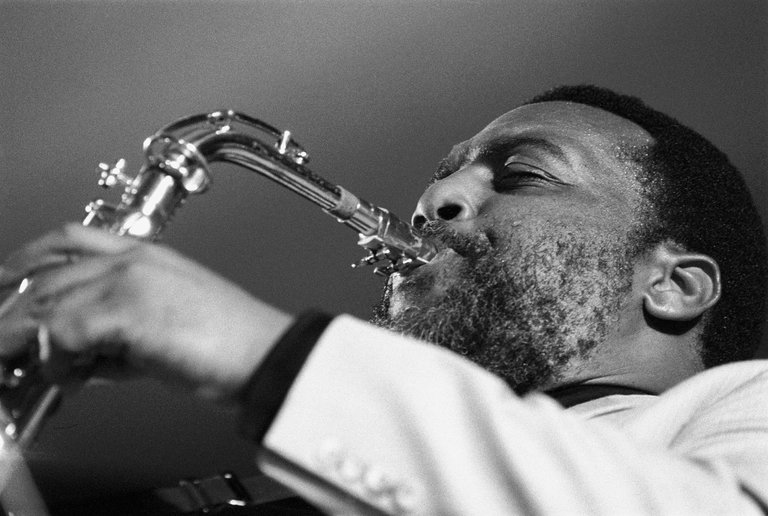 "Arthur Blythe, whose brawny alto saxophone sound and independent spirit made him a standard-bearer of the New York jazz avant-garde in the late 1970s, died on Monday at a retirement home in Lancaster, Calif. He was 76.

The cause was complications of Parkinson’s disease, said his wife, Queen Bey Blythe.

When Mr. Blythe arrived in New York from California in the mid-1970s he was already well into his 30s, with a trenchant, vibrato-thickened saxophone style and a reputation that preceded him.

‘It was pretty much undisputed that Arthur Blythe was the best alto saxophonist out there on the West Coast,’ the tenor saxophonist David Murray said in a phone interview.

Mr. Blythe quickly became a leader of the newly ascendant loft jazz scene, centered on musician-run venues in Lower Manhattan. Within three years, he had a deal with Columbia Records, making him a spokesman for jazz’s Afrocentric vanguard at a moment when the music’s future was far from certain.

Continue reading the main story His first two albums with the label, both released in 1979, bespoke the breadth of his vision. On ‘In the Tradition,’ he performed compositions by Duke Ellington, Fats Waller and John Coltrane accompanied by a standard rhythm section of piano, string bass and drums. ‘Lenox Avenue Breakdown’ featured tuba, electric bass, flute and assorted percussion and consisted of four giddy, hotfooting originals that opened up into extended improvisations.

In 1982, the critic Francis Davis wrote that Mr. Blythe ‘may well prove to be the magic figure of reconciliation, the force for consensus, that modern jazz has been looking for in vain since the death of John Coltrane in 1967.’

That was not to be. Within a few years, a young crop of neo-traditional musicians had seized what spotlight remained for jazz. Mr. Blythe left New York at the end of the 1990s, and his playing career tapered off.

‘I would love for everyone to accept my music, and I would love to make money, but only by keeping my music on the cutting edge,’ he said in a 2000 interview with The San Diego Union-Tribune.

Arthur Murray Blythe was born on July 5, 1940, in Los Angeles, the middle child of three sons. (A fourth brother died as an infant.) His father was a mechanic, his mother a homemaker and part-time seamstress.

His parents soon divorced, and when he was 4 he moved with his mother to San Diego. At 9, inspired by the rhythm-and-blues and swing records she often played, he asked her for a trombone. She gave him an alto saxophone instead.

He studied with Kirkland Bradford, who had played with the Jimmie Lunceford big band, and developed a trilling style reminiscent of postwar saxophone stars like Earl Bostic.

Mr. Blythe worked in R&B bands throughout his teens, learning to cut through the volume of electric guitars while maintaining a romantic lyricism. That mixture of sultry and strident came to define his style.

Newsletter Sign UpContinue reading the main story Louder Stay on top of the latest in pop and jazz with reviews, interviews, podcasts and more from The New York Times music critics.

You agree to receive occasional updates and special offers for The New York Times's products and services.

MANAGE EMAIL PREFERENCES PRIVACY POLICY OPT OUT OR CONTACT US ANYTIME When he was 19, he moved back to Los Angeles, where he met the pianist and bandleader Horace Tapscott and became affiliated with the Union of God’s Musicians and Artists Ascension, Mr. Tapscott’s Pan-African alliance of innovators.

In 1974, frustrated with the Los Angeles jazz scene’s limitations, Mr. Blythe left for New York, determined to make his mark.

He arrived with a nickname that reflected his self-affirmation and his uncompromising spirit: Black Arthur. He was known in Los Angeles for his racial pride and his willingness to speak boldly on behalf of other black people, despite an otherwise understated demeanor. Mr. Murray recalled him standing up fearlessly to police officers who had hassled him.

Mr. Blythe embraced the nickname, even calling himself Black Arthur Blythe on the cover of a 1978 album, ‘Bush Baby.’

Soon after arriving in New York, he began assembling bands with unusual instrumentation. When not playing with a straight-ahead quartet, he favored chunky, percussive backdrops that offset his tuneful improvising.

In 1977, The New York Times critic Robert Palmer praised Mr. Blythe, writing, ‘He is sly; he teases the beat, toys with polyrhythms and leaves gaping holes in the fabric of the music, only to come roaring back in with plangent held tones or crisp, punching riffs.’

Even after signing with Columbia, Mr. Blythe insisted on creative autonomy, releasing nine albums across a range of styles. He continued to record and perform regularly, often with the tuba player Bob Stewart and the drummer Cecil Brooks III, after Columbia declined to renew his contract in 1987.

He moved back to California in 1998 to take care of his children after his second marriage ended. He performed less frequently but released a handful of albums on the Savant label in the early 2000s before failing health eventually forced him to stop performing.

In addition to his wife, Mr. Blythe is survived by his daughter, Odessa Blythe, and two sons, Chalee and Arthur Jr., all from his second marriage; two half brothers, Bernard Blythe and Adrich Neal; and a half sister, Daisy Neal. His first two marriages ended in divorce.

‘The music that I deal with has elements of bebop to ballad, swing to sweet, blues to boogie, and pop to rock,’ Mr. Blythe told the musician and oral historian Ben Sidran in 1986. ‘If I have the ability to do that, I should be able to do whatever I want to do in those areas — because I am dealing with the tradition, and my culture, and my heritage.’"

(Via.). Arthur Blythe, Jazz Saxophonist Who Mixed Sultry and Strident, Dies at 76 - The New York Times: