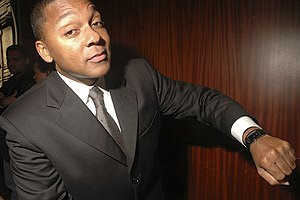 Wynton Marsalis thinks big — and he has the talent, drive and clout to carry out his ambitions. Hence “Swing Symphony” (Symphony No. 3), his latest omnivorous attempt to merge the history of acoustic jazz with a symphony orchestra.
First heard in Berlin, then in the New York Philharmonic’s season-opener in September, “Swing Symphony” reached Los Angeles on Saturday night as Walt Disney Concert Hall’s stage groaned under the combined weight of the Los Angeles Philharmonic and Marsalis’ Jazz at Lincoln Center Orchestra. Los Angeles received a bonus: The piece’s fifth movement, which was deleted from the New York performance due to TV time limits, was played here, making this the U.S. premiere of the complete work.
From a jazz point of view, Marsalis’ new work can be heard as a homage to his idol Duke Ellington’s “Black, Brown and Beige” — sometimes rather explicitly in sound. Yet Marsalis is also applying Mahler’s vision of what a symphony should be: an embracing of the world.
Like Marsalis’ “All Rise,” which the Los Angeles Philharmonic and the Jazz at Lincoln Center big band performed and recorded in 2001, “Swing Symphony” is more of a suite than a symphony, in which a plethora of idioms jump-cuts wildly from one to the next. Marsalis arranges his six-movement, 51-minute cross-section of jazz history more or less chronologically, from ragtime to the Charleston, the big band era, bebop, Afro-Cubop and John Coltrane’s modal period (the fifth movement) before doubling back to a ballad for Ellingtonian saxophones. Clearly any developments beyond 1961 — the year of Wynton’s birth — remains out-of-bounds on the Marsalis jazz timeline.
Luckily, the piece has an irresistible vitality over its long span, and Marsalis does get the symphony orchestra thoroughly involved. Encouraged by jazz-attuned conductor Leonard Slatkin, the Phil could swing harder than its New York colleagues at times, and there were plenty of scorching solos from the Jazz at Lincoln Center band — including Marsalis himself, seated as always in his trumpet section. But there are many portions — the second movement in particular — in which there is just too much busywork, enough to keep this huge apparatus from fusing, lifting off and finding its groove.
In programming Gershwin’s “An American in Paris” — and what a delight it was to hear it indoors, for a change, instead of through outdoor amplification — Slatkin not only suavely illustrated the lineage of classical-jazz fusion, he let Gershwin make points of the virtues of self-editing, segueing, not overloading the texture, and, of course, one great tune after another. Shostakovich’s spiffy little Jazz Suite No. 1, with its Weill-like marches and impish humor, showed that the Jazz Age spread as far as Russia.
The audience responded wildly; only Gustavo Dudamel gets as big a hand at L.A. Philharmonic concerts as Marsalis got. As an encore, Marsalis launched an eloquently subtle blues jam, in which every member of his big band took a chorus.